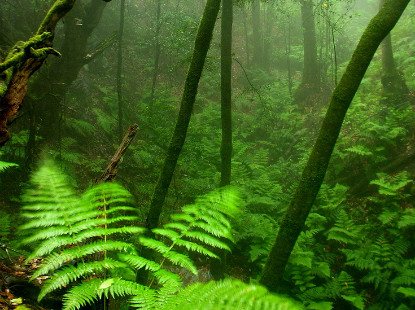 La Gomera is a volcanic island about 12 million years old, created by the accumulation of materials erupted in different volcanic periods separated by many years of inactivity. One feature that distinguishes La Gomera from the remaining Canary Islands is that the last ruptions occurred about two million years ago. This has led to a prolonged and intense erosive action that has dismantled the original volcanic structures, causing the steep current morphology. One example is he spectacular geological monument of Los Roques o Los Órganos. The park is known mostly for being the leading example of the Canarian Laurel forest, an ecosystem from the Tertiary, which disappeared from the continent as a result of climatic changes in the Quaternary. The Garajonay Laurel forest has one of the largest examples of this type of vegetation throughout the archipelago, in optimum conservation conditions.