Where Sierra Nevada dives into the desert 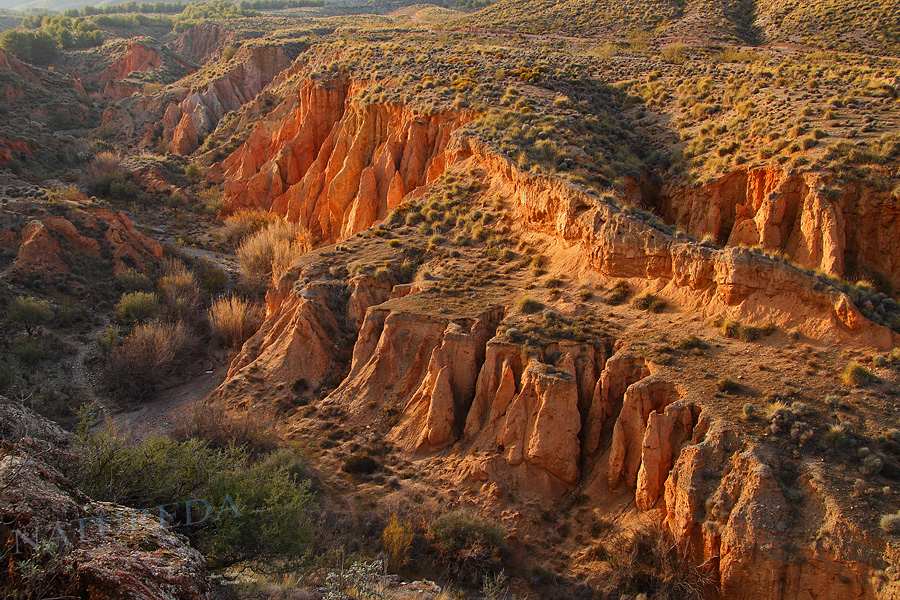 Where Sierra Nevada dives into the desert: The little Grand Canyon, the Rambla de los Yesos

If we hear or read about the Sierra Nevada National Park, we always tend to think of the high Mediterranean mountains and the Mulhacén reigning over the sea. However, Sierra Nevada hides several secrets to be discovered, such as the Rambla de los Yesos, located at its most eastern point.

This geology gift was formed about 6 or 7 million years ago, at first as sea arm. It would end up drying up approximately one million years later, forming the desert canyon we can see today. The visit is recommended for professionals and amateurs: geologists can go in to search some hidden fossils; the hiker, photographer or observer will be lucky enough to enjoy the wonderful red walls on both sides of the canyon, formed by erosion and that come to create such spectacular shapes as the “Chimney of the Fairies”, which to many will remind them of the famous and tourist Cappadocia of Turkey.

Although we are really in the only desert in Europe and at first the canyon seems dry, the subway water makes many rare species blooms amazingly in such an arid area. In the green cliffs we can find capers, thyme and rosemary, besides being able to observe different types of birds like Black Wheatear, some Blue Rock Thrushes, Little Owls or the flight of a Hobby. Perhaps, with a bit of luck we can hear the unique Trumpeter Finch.

The trail through the Rambla de los Yesos is 13 kilometers long, all in circular direction; therefore, start and finish are at the same point. The first part of it, which runs through a canyon, is relatively flat, making it suitable for less experienced hikers. While the second part, where you must face a 400-meter climb and descent, is more suitable for slightly more prepared hikers. After the drop, the path begins to narrow gradually and the large red walls get closer and closer, until at one point the canyon reopens and the hiker can see it from above.

From the top of the Cordel de la Solana, which gives its name to the trail, we can enjoy the extraordinary panoramic view of the Andarax Valley and the Sierra de Gádor and its characteristic white villages on its slopes. In the east we find Sierra Alhamilla, the bay of Almeria and in the background, you can even see the Natural Park of Cabo de Gata. In addition, for those who own a bird’s eye view, you can even see the Cumbre de Montenegro and the National Park area.

At the end of the trail we return to the beautiful village of Alboloduy, the remains of its Arab fortress and the valley of the Nacimiento river. Along the way it is common to find pilgrims, as the Mozarabic side of the Camino de Santiago passes through there in the direction of Santiago de Compostela.